One of the great pleasures for the Carnival Committee is to be able to invite people from our villages to act as our Carnival Openers.

We are delighted that Ben and Jane Wright, from Edlesborough Autos have kindly agreed to act as our openers this year. Both are well known to many people in the villages - they make a tremendous contribution to village life.

Ben writes. "In a year that sees the Queen's Jubilee, the Euros and the Olympic Games, the biggest event will obviously be St Mary's Village Carnival. I was very surprised and honoured to be asked to open this year's event and, after agreeing to the request, I was asked to write a short note explaining who I am.

I grew up in Dagnall, went to the local primary school and then on to Aylesbury Grammar School. On leaving school I did an apprenticeship at Chrysler in Dunstable, qualifying as a Design Engineer.

I have always been involved with village life, as a lad working on the farm in Dagnall, playing football at Dagnall and Edlesborough and moved to my first house in Edlesborough in 1978.

I was always interested in repairing cars, which I used to do in my parents' garage at every opportunity. This led to me leaving Chrysler and starting work for myself, initially at the now demolished garage in Northall and then moving to Walton End Garage and starting Edlesborough Autos.

With the business being in the middle of the village, over the years it has been well supported by local people and one great aspect is seeing children who used to buy sweets from us on their way to school, now bringing their cars to us for MOT or repairs.

I also have the garage to thank for meeting Jane who used to come in for petrol and a few years later we got married giving me a great wife and mum to Ben and Sam.

We look forward to seeing you all and hope you have a great day." 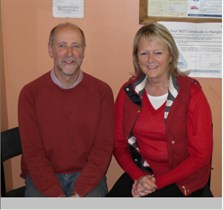